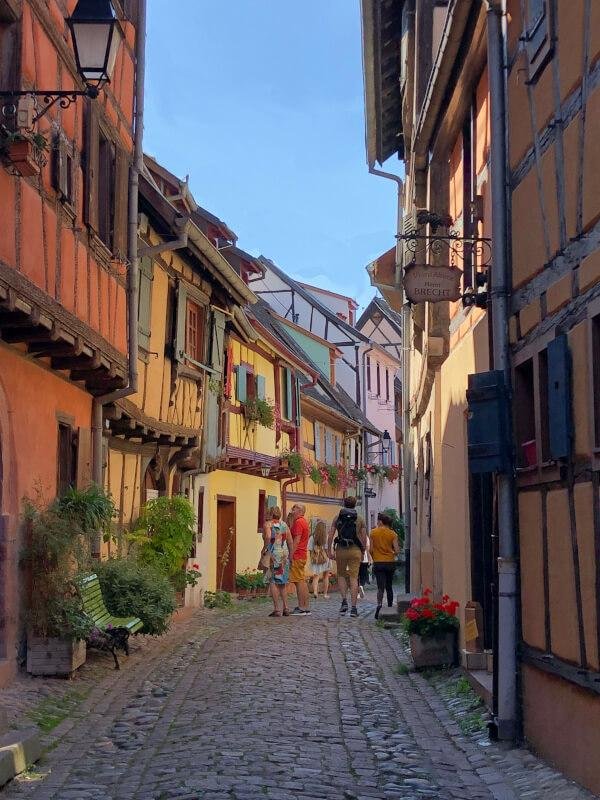 The beginning of our time in Switzerland landed us near the borders of France and Germany in Basel, Switzerland. We spent 5 weeks in Basel which provided a great base for exploration in all directions. Our friend, Dauphine, who gave us a walking tour of the Vaux wine region in southern Switzerland had recommended Touring the Alsace Wine Route.

The route is a collection of trails, walking paths and rural roads that run through the Alsace-Lorraine region from Thann in the south to Strasbourg in the north. It is filled with terraced slopes criss crossed with abundant vineyards and dotted with traditional Alsacien towns. It was already mid-September and harvest was in full swing. Perfect. We grabbed our folding travel bikes and set off to tour the Alsace Wine Route.

Alsace is a unique region with its own language and culture although French is commonly spoken. Over time, the area has been a part of both France and Germany and shares influences from each. Most recently, Alsace was ruled by Germany until the end of WWII when it became a territory of France. A tour of the Alsace Wine Route provides a great way to explore the small Alsacien villages, wines, and food and experience it’s multicultural influences.

Great weather met us as we started our tour in Eguisheim, population 1700. This charming medieval village is made up of narrow streets lined with half-timbered houses, cafes, restaurants and artisan shops. Geraniums spilled from window boxes and friendly shopkeepers greeted us with a smile and “Bonjour!” as we meandered through town.

An inviting little cafe fronted by colorful blooms and a handwritten board of the day’s specials seemed like a promising option for lunch. We struck up a conversation with the friendly owner who welcomed us from the small open kitchen located near the sunny front window. L’Atelier de Béné, literally the “workshop of Béné” is named after chef and proprietor Béné Pieron.

In 2010 Pieron and her husband purchased a home in Eguisheim with an unfinished space across the narrow cobbled alley. Her husband had used the garage space to restore vintage motorcycles in his spare time. That was until they had a baby on the way. 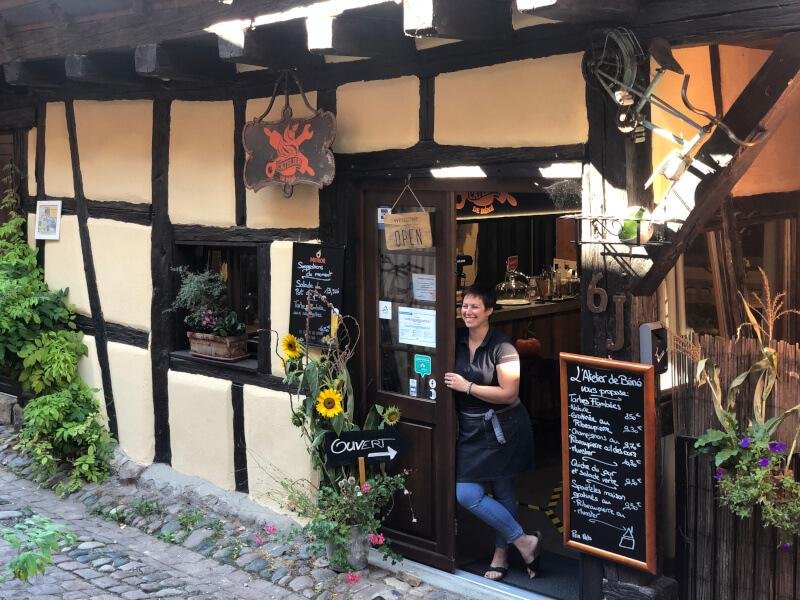 As their young family grew, Béné decided she wanted to work closer to home. The lost-to-time village of Eguisheim was becoming a popular destination for those touring the Alsace Wine Route, and she saw an opportunity. Her vision was to offer the best of locally sourced products and traditional Alsacien dishes. No pretense, just quality, craft, and hospitality. Armed with a culinary degree and years of experience as a chef in Strasbourg, in 2015 the old workspace was converted into the charming cafe we had wandered our way into. 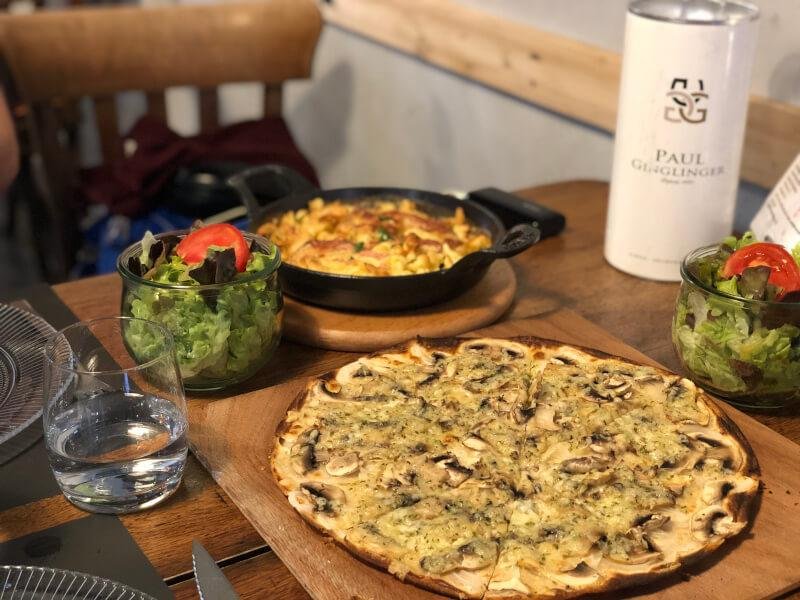 We made a few selections from the specials board and settled in to enjoy our first meal in Alsace. A mixed green salad with tender lettuce from a neighbor’s farm was first to arrive. Lightly dressed with olive oil and lemon and studded with a meaty tomato wedge it was the perfect balance of sweetness and acidity.

Next was authentic tarte flambée, also known as flammekueche (pronounced flem koush). Flammekueche resembles a pizza, but has the creamy, rich flavors indicative of this verdant region of France. (Those who have joined us in Paris may remember the fabulous Flammekueche at L’Alsaciene, one of the small, family owned restaurants we love to visit).

As it’s base, Flammekueche has a very thin, almost pastry-like crust. The dough is first spread with a layer of crème fraiche. Then it is topped with thinly sliced onions and crisp lardons (similar to American bacon).  Finally, it is baked in an oven at very high heat rendering the crust crisp, light, and slightly burnt at  the edges. Additions may include Emmental cheese or thinly sliced mushrooms. Never afraid to gild the lily, we opted for both. While not the same as what we have had in Paris, this tarte flambee was every bit as delicious.

Finally, there was a generous skillet of spaetzle. Described as “tender eggy dumplings”, spaetzle is a popular dish in Germany and the German areas of France and Switzerland. The tender, noodles were smaller than a pinky, about as fat, and irregularly bent and twisted. All the better to hold the buttery sauce it was bathed in. Spaetzle feels like a lovely bowl of rich comfort food. Warm, cheesy pasta, it was so good. The meal was made complete with a light, crisp Sylvaner, a wine local to the Alsace region. 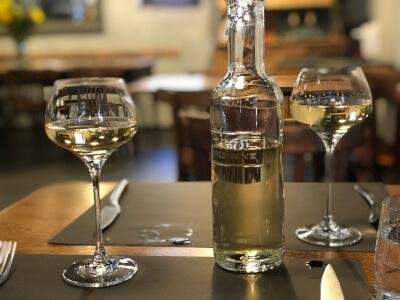 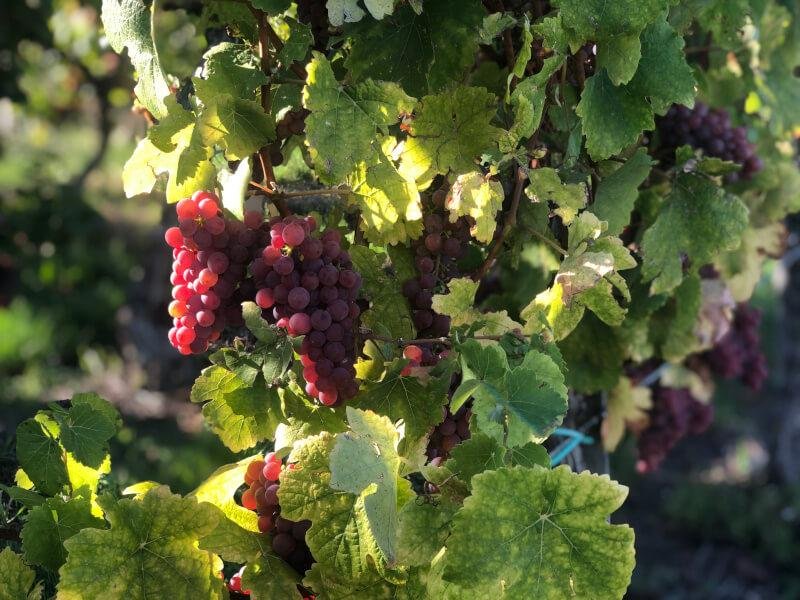 Winery and Vineyard Tour on the Alsace Wine Route

Of course we could not complete touring the Alsace Wine Route without actually visiting a winery. That would be wrong. There are several local winemakers in Eguisheim where you can try the many varieties of the Alsace region. Béné recommended the family-run Meyer Jean-Luc winery and called ahead to let them know we were coming. In their tasting room, and unassuming space just off a main street, Marie Meyer, the vintner’s daughter, met us and led us through a tasting of their estate whites as well as a Cremant de Alsace, a refreshing and crisp sparkling wine. She then walked us through the facilities where her brother and his son were pressing grapes from that day’s harvest. The entire place smelled deliciously of overripe grapes and funky oak. 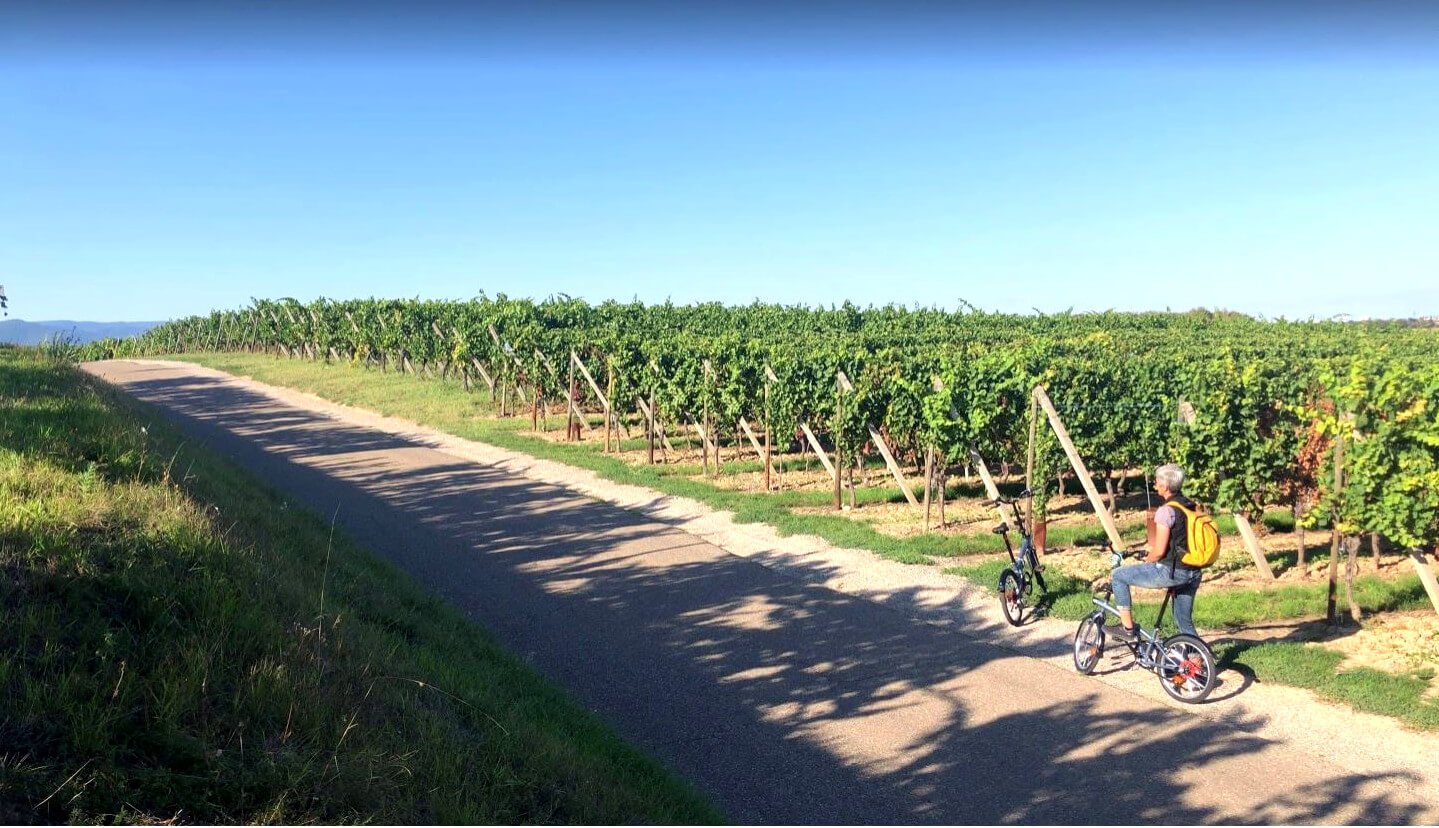 After our lunch, wine tasting, and wandering through the town, we set out to explore the Alsace Wine Route through the vineyards. (But not before imbibing a much needed espresso.) We followed an easy loop that took us north toward Bennwihr and returned through Colmar. We were surrounded by vines heavy with fruit of various varieties and sweeping views of the valley. The paths were well marked and could also be easily walkable. There are a few hills within the terraced vineyards that were a challenge with our little foldable bikes but would be smooth rollers for road or electric bicycles.

Overall we were very impressed by the ease of touring the Alsace Wine Route. It is chock full of beautiful, interesting things to see, and great food and wine. The Alsace Wine Route can be navigated by foot, bike, car and even train. There is very little traffic off the main roads, and we really felt like we were away in the country. While it may be expeditious, we did not find it necessary to have a predetermined itinerary. There’s lots of wonderful wineries and charming villages to choose from. It was fun to pick our way along, deciding which way to go according to our interest, effort and recommendations picked up along the way.

Choose Your Walking or Art Vacation

Are you looking for a leisurely European walking vacation or a travel journal-based art vacation? To book, select your program type or destination below. We will take you there!