Walk on the Coulée Verte

Discover a green passageway in the urban center of Paris, France

I first learned about the Coulée Verte (the Green Stream) in 1996. Paris, France had created a thriving public park out of an abandoned railway line. It was the first of its kind. Abandoned, dilapidated tracks, which had become an ugly, crime-filled nuisance, were converted into a beautiful and much used green space. A pedestrian corridor – free of traffic and filled with plantings, public art, and unique city views – now connected the eastern city limits to the city center. A walk on the Coulée Verte, also known as the Promenade Plantée (Planted Walk)  was and is a wonderful and wondrous urban stroll. As an urban geography grad at UC Santa Barbara, the latest innovations of urban planning were points of great interest to me. Re-purposing blighted land use into a thriving community asset? This was something to get excited about! 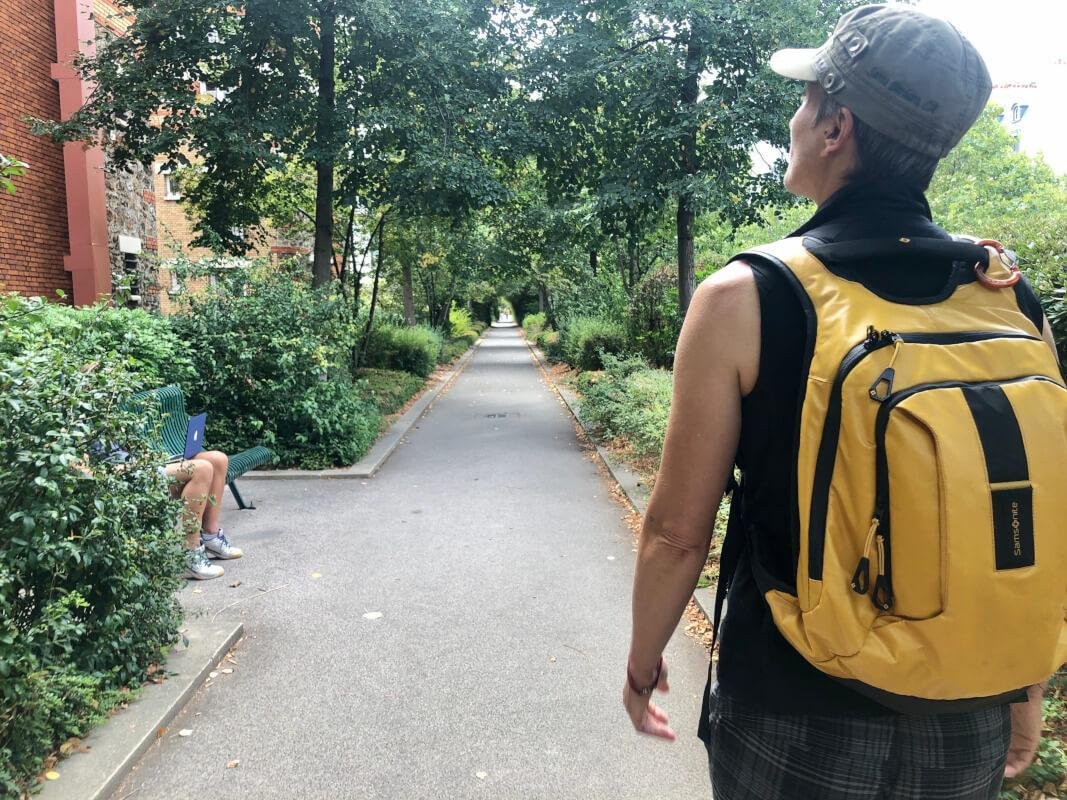 From Railway to Pedestrian Park 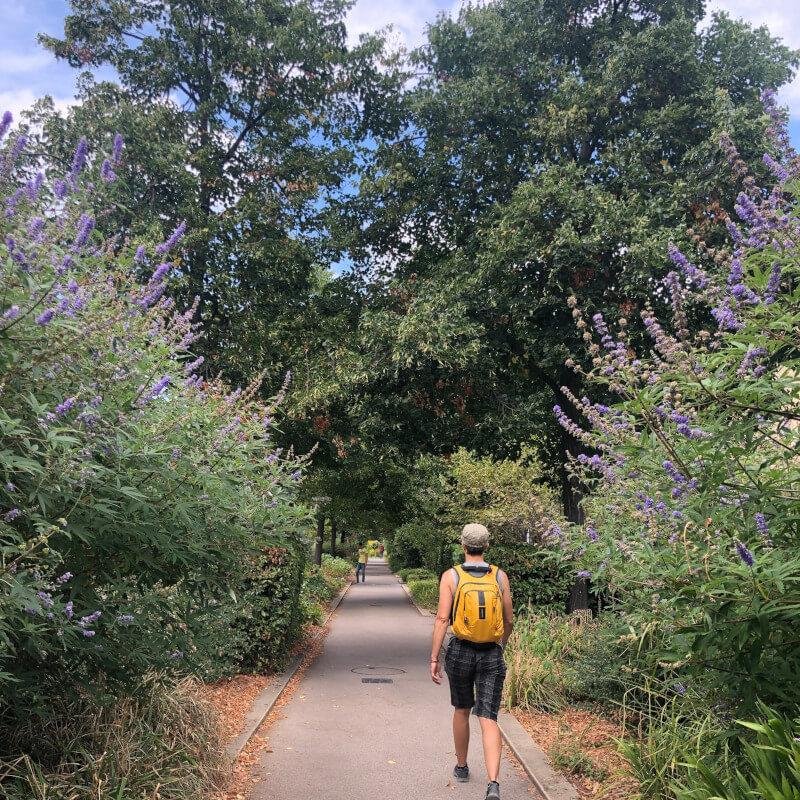 From 1859 to 1969 the old Vincennes railway line ran between Verneuil-l`Étang, a town 60km outside Paris, and the Bastille. The Coulée Verte was created from the portion of the Vincennes line that runs 2.8 miles eastward through the 12th arrondissement to the city limits at Bois de Vincennes Park. A first of its kind, the promenade was created from an elevated tramline build upon an arching viaduct.

When the Coulée Verte project design was initiated in 1988, public opinion deemed it a waste of money and time. However, soon after its completion in 1993, the Coulée became a much used and appreciated neighborhood gathering place. A success story for urban redevelopment and renewal, it is one of my favorite “hidden places” in Paris.

A Unique Walk on the Coulée Verte

Whenever I’m in Paris I always try to make time to do this walk. The Coulée Verte is a little under 6 miles round trip. In the absence of cars and traffic, it makes it the perfect place for a brisk walk or run. It is also impossible to get lost and you can turn around at any time. This makes it a great option for all activity and interest levels.

However, more often than not, people enjoy the space at a leisurely pace. Small alcoves and many places to sit invite park-goers to slow down and relax. The narrow paths and abundant blooms encourage a moderate step. It’s an opportunity to smell the roses. 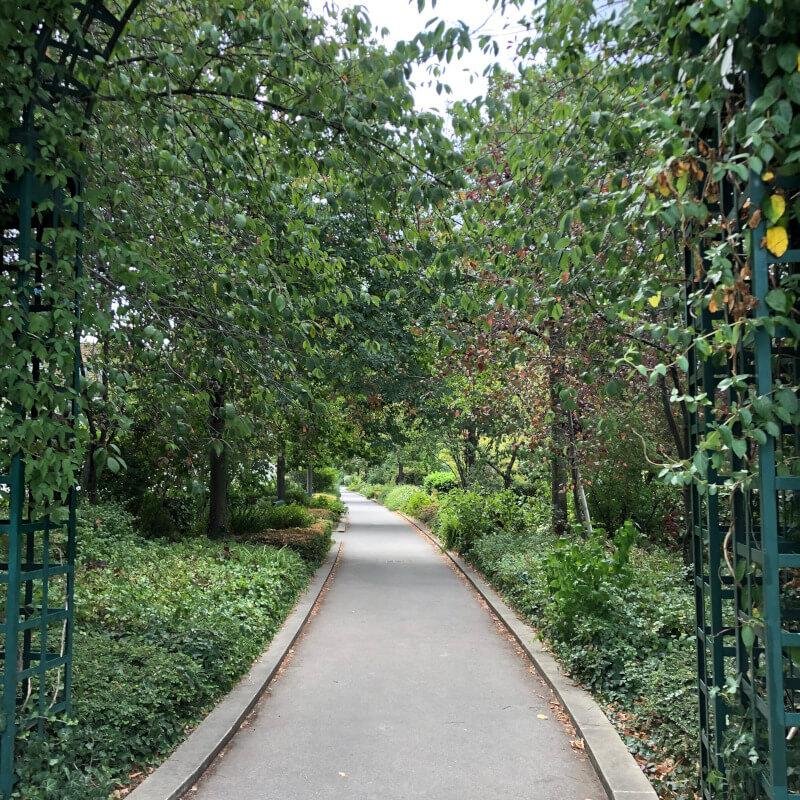 What a Walk on the Coulée Verte is Like

Traversing high above the city streets, the promenade offers scenic views over the city and up-close perspective to some of its characteristic architecture, ranging from 1800s to modern. Down below, the renovated Viaduct des Arts houses galleries, artists workshops, small boutiques, and hip restaurants and bars. From this unique perspective you can look across, into, and down upon the buildings of Paris. Walking the Promenade Plantée is a great way to see a behind-the-scenes slice of Paris.

Walking the Promenade Plantée is also incredibly picturesque. It might even seem familiar. A garden oasis raised above the busy city below, the Promenade Plantée was featured in film. Fans of the Ethan Hawk and Julie Delpy film “Before Sunset” may recognize it. The Coulée Verte was one of the filming locations. 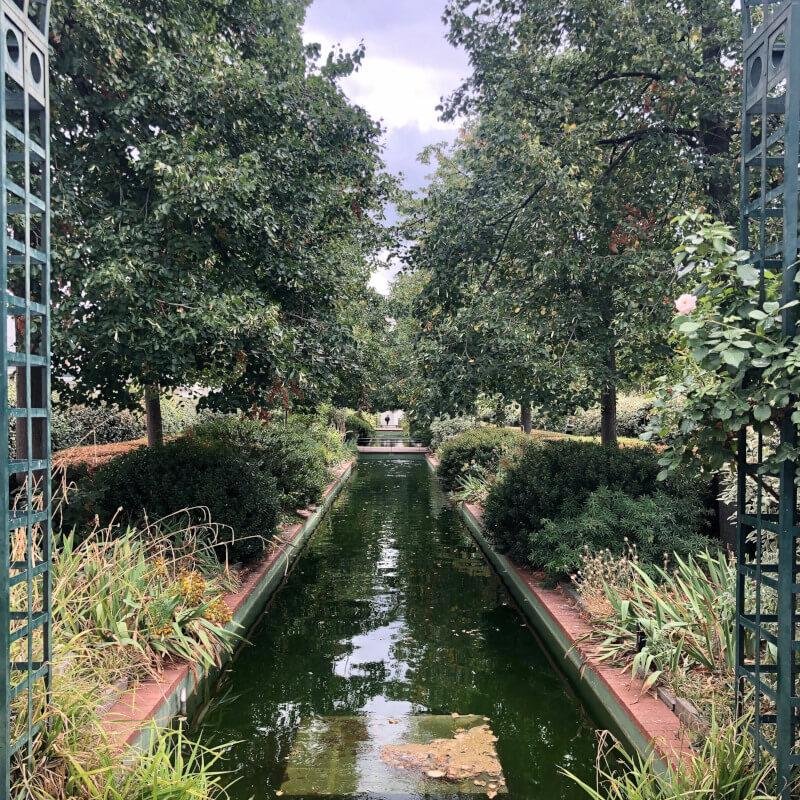 The elevated portion of the walk extends for about a mile. Built upon a viaduct, it is a lovely walk all on its own. The promenade was designed to be a respite from the crowded and noisy streets below. Fragrant roses, tranquil reflection ponds, and sections of lush shade collaborate to provide a welcome urban retreat.

Walking on the Promenade Plantée reveals vignettes of life in Paris at all times of day. In the mornings walkers and joggers traverse the passage as a regular routine. At lunchtime Parisians can be seen sharing meals in ones and twos along the many benches and seating areas provided. In the evenings, the path provides a way to relax and unwind after a day’s work. Some take in the views and decompress from their day. Others meet friends for a convivial happy hour as the sun goes down.

Art and Architecture as Design 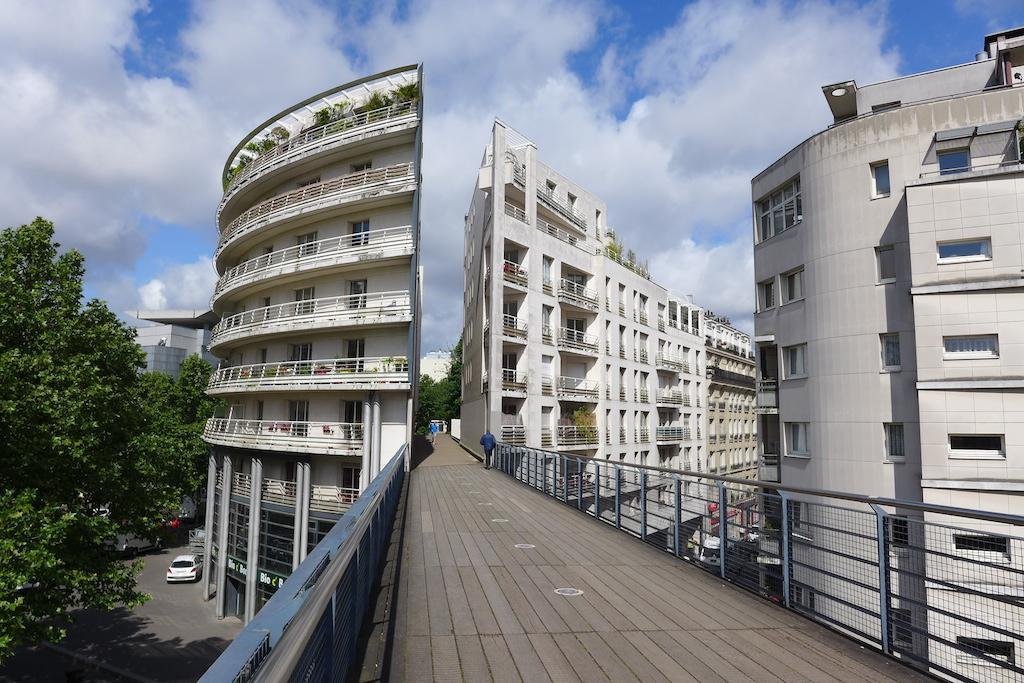 Here and there, the folliage opens up to allow for wide open spaces and expansive views. At some points, classic, multistoried buildings set upon the edge of the rail easment and elegantly frame the walk on the Coulée Verte.  At others, the path becomes very much a part of the built environment, even slashing through one modern, asymetrical design.

Urban art is infused throughout the walk on the Coulée Verte. Inspired by their surroundings, the various pieces provide playful expressions to further interact with the park. Near the eastern end of the trail a in shaded nook two abstract metal sculptures also function as ping pong tables. At the start of the bike path a steampunk inspired piece incorporates curvilinear shapes and gears echoing biclycle components. Additonally, it reminds us of the train engines that used to rule these rails.

Illustrator Caroline Laguerre has several pieces along the walk on the Coulée Verte. A series of three frescos decorate the alcoves of a residential building. Our favorite, Si,Si, La, Fa, Mi, is shown above. Their simple lines and primary colors are playful and fun. With a smile, they invite strollers to pause on the welcoming benches and watch the world go by. 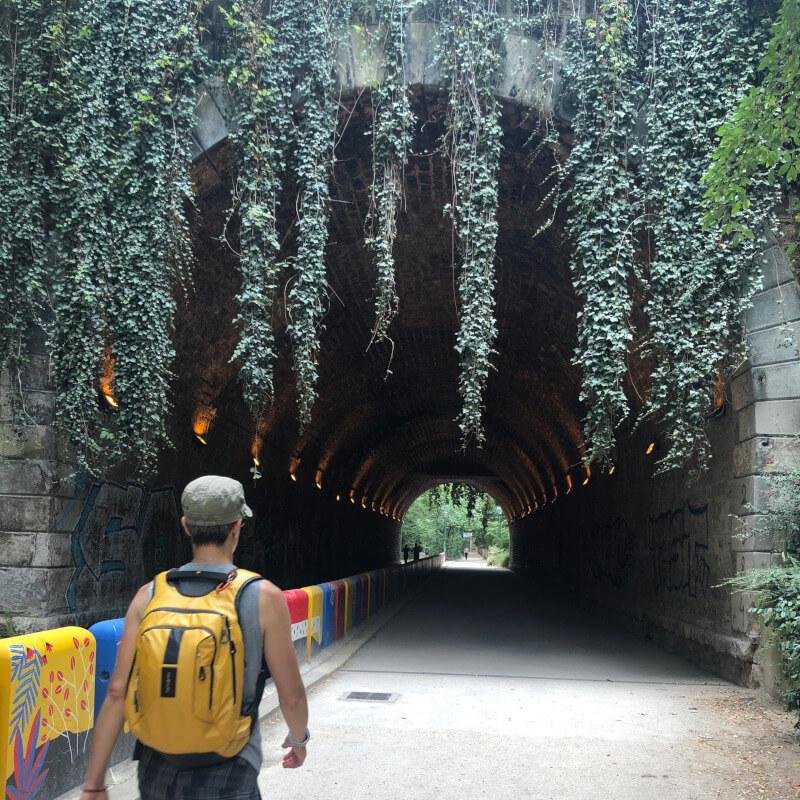 To walk the Coulée Verte you experience a diverse range of terrain and interesting things to see. After about a mile the elevated path reaches the ground and opens to allow for bikes. Then an arching suspension bridge spans over a quiet neighborhood park. Next the walk goes through cool tunnels accented with urban art and draping vines. After, sections with dense folliage give the sense of walking through a wood.  Finally, there are stretches of quiet natural paths and verdant community gardens. It is one of the most diverse urban strolls to be found.

How to get to Coulée Verte 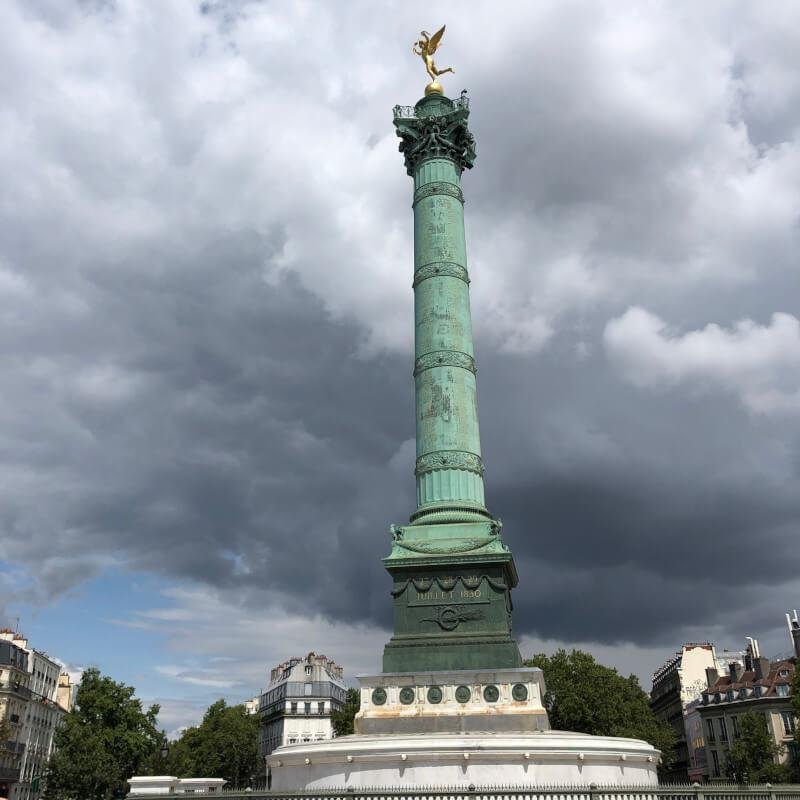 To walk the Coulée Verte, it is most easily reached from Place de Bastille. First, from the towering column topped with the golden statue ‘le Génie de la Liberté’ (Spirit of Freedom), walk Rue de Lyon past the modern Paris Opera house. Next, continue onto Rue Daumesnil where the blocky bricked beginning of Viaduct des Arts may be seen. Then access the stairs located on the right side of the viaduct which take you up to the elevated Promenade Plantée. At street level there will also be signage for the Coulée Verte walk. 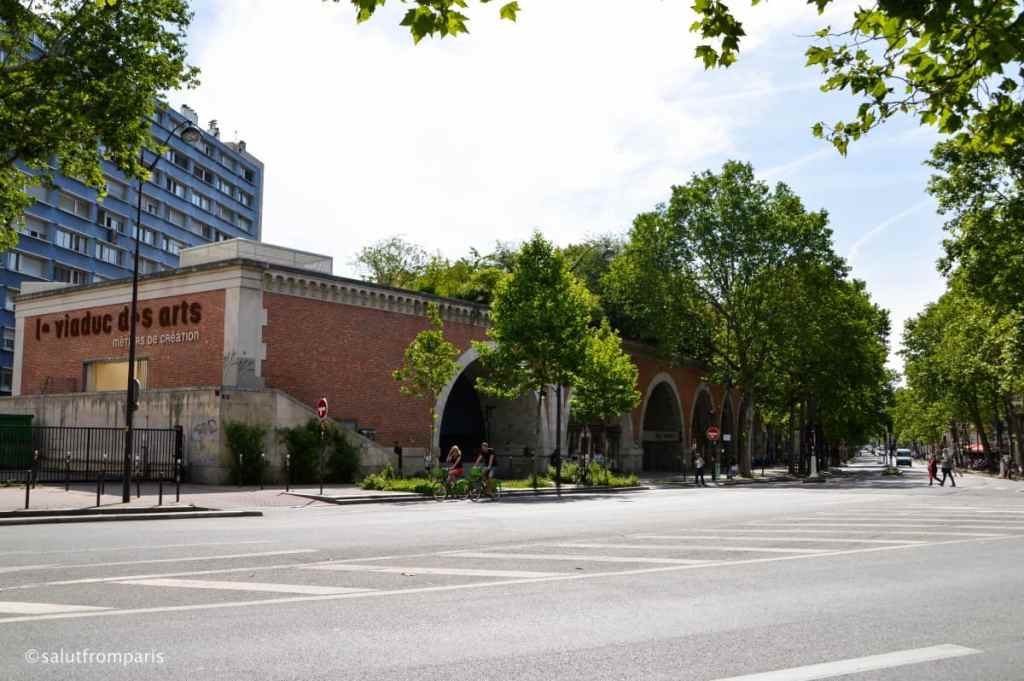 From the time before the Romans conquered the native Parisii in 52BC, Paris was a walking city. It was the only means common citizens had to move about. Over the ages, as the city grew, its streets and buildings developed around the center at Île de la Cité in a dense, compact labyrinth. Even in 1610, when Paris was one of the largest cities in Europe, one could walk across it in about 30 minutes. Then, in the 1800s, public transportation based on railways was introduced. These affordable conveniences could carry residents from the newly created suburbs into the city for work, shopping, and culture. Like the arms of a starfish, urbanization began to reach out from the city center along the tracks of these transportation corridors.

Finally, in the 1900s, the automobile became an option for many residents. No longer dependent upon public transportation routes, housing began to grow out from the city center and metro stations and infill the regions between the established commuter railways. Eventually, some of these rail systems were no longer needed. In the 1950s-60s many were taken out of service. Now abandoned, the rails became a dumping ground and harbor for illegal activity.

The Coulée Verte urban renewal project brought new life and community pride to what had become a run-down area. It is a walk worth doing. It has the intrinsic benefits of open air and exercise. Additionally, it is a good example of how modern Paris continues to recreate itself to provide for the well-being for its citizens. Forever a walking city, Paris is filled with places that nurture physical, mental, and community health.

Choose Your Walking or Art Vacation

Are you looking for a leisurely European walking vacation or a travel journal-based art vacation? To book, select your program type or destination below. We will take you there!